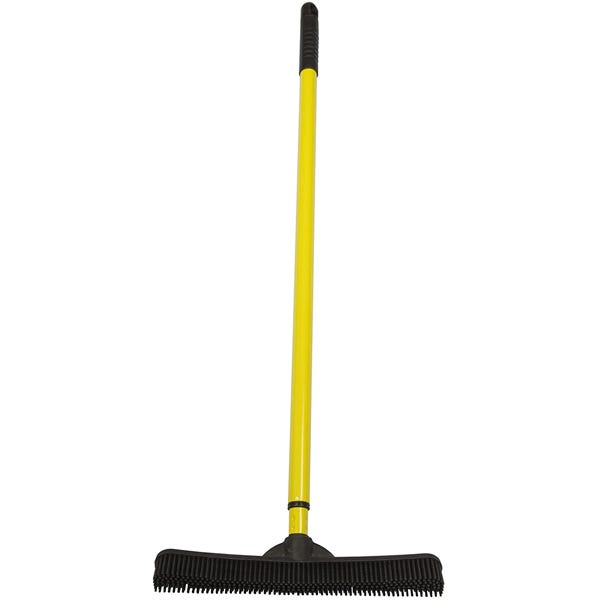 My rescue dog Poppy is small, but she is mighty. And for such a little pup, she sheds more than I thought she would. When I had to move out of my heavily carpeted rental last month, I tried the $13 Furemover Broom instead of an expensive vacuum cleaner. For this review, the manufacturer sent me an editorial sample to test.

I was impressed by this carpet rake's effectiveness after testing it on my fur-embedded carpeting. Keep scrolling to find out what's it like to use this broom and see some before-and-after photos.

Our review of the Furemover Broom for pet hair

One of Poppy's favorite pastimes is wiggling on the carpet while basking in the sun. After she's done, she gets up and shakes — this gets even more hair lodged in the carpet.

Cue the Furemover Broom. When the pet hair broom arrived in the mail, it came in two pieces and was incredibly simple to put together by twisting the rubber base to the adjustable handle.

Using the broom like a rake, I started raking the rug and found that it bundled all of the dog and human hair into clumps. Plus, the rubber bristles also surfaced crumbs and lint embedded in the carpet.

The end results were spectacular. The carpet was visibly cleaner after about 10 to 15 minutes of combing. I figured there would be a lot of dog hair, but I was surprised at how well the broom gathered human hair and lint on the floor as well.

To clean the broom after use, I followed the manufacturer's instructions to wash the head under the faucet with water and soap.

What makes this pet hair broom stand out

As a recent college graduate, it suffices to say that spending a lot of money isn't always doable. For $12, this pet hair broom is not only the cheapest way to clean pet hair from carpets but it's also incredibly efficient and easy to use and store in a home.

Besides the low price, the effectiveness of the broom is unmatched. It dislodged months of human and pet hair, as well as lint, crumbs, and dust. After I used the broom, I did a quick vacuum and realized how quickly my inexpensive Amazon vacuum lifted anything left in the carpets thanks to the initial cleaning with the broom.

I now use the pet hair broom every few days to do a quick comb of the floors and couches for pet hair. Plus, I just received my security deposit back from my rental and there were no notes about pet hair — meaning this broom really did the trick.

While the Furemover worked wonders for me, it's not a vacuum cleaner. The broom requires light manual labor to clean carpets, so if you prefer the ease of a vacuum and can afford one that is pet vacuum, that could be a better option.

Additionally, my long-haired mix has medium to long fur and the broom got her fur out of the carpet easily. However, if you have a pet with shorter hair, the bristles may not catch smaller hairs.

The Furemover pet hair broom is the ultimate tool for removing hair from floors and it aids in general cleaning by lifting up crumbs or dirt that may go missed by an average vacuum cleaner. Using the broom showed great improvements in the cleanliness of my carpets and the fact that it's only $13 is the cherry on top. Perhaps best of all, it saved me from potentially paying my landlord extra for cleaning.

$12.98 from Chewy
Originally $18.60Save 30%
Anna Popp
Home and Kitchen fellow
Anna is the Home and Kitchen fellow on the Insider Reviews team. She recently graduated from Seattle University where she studied journalism and French. Previously, Anna edited and wrote for her university's newspaper and has been published in the Seattle Times. Anna also has experience writing about sewing machines and party decorations. When she's not working, you can find Anna curating her next home decor project or planning themed gatherings with her friends.   Learn more about how our team of experts tests and reviews products at Insider here. Learn more about how we research and review home products.