The "Harry Potter" film series features some of the most iconic slices of cinema of the last 20 years. From magical moments like the first arrival at Hogwarts, to kinetic fight scenes like Dumbledore vs Voldemort at the ministry of magic, to tense set-pieces like the escape from Gringotts, the series is jam-packed with memorable scenes.

But with "The Deathly Hallows Part 1" celebrating its 10 year anniversary, one particular scene in that penultimate "Potter" movie stands out from the rest.

When I was a kid, I thought it was awkward and slow but now, Harry and Hermione's dance scene is my favourite in the entire series. Here's why.

While there may be more obviously emotional and tear-inducing scenes in the "Harry Potter" movie saga, like Dobby's death or Harry bringing Cedric's dead body back to his father, it's this scene that stayed with me the longest after a recent rewatching of the series.

Harry and Hermione, during their search for Voldemort's Horcruxes, have just been abandoned by Ron. It's one of the lowest points, emotionally, the three characters have ever been.

In an attempt to cheer up his friend, Harry decides to take action. While Hermione is listening to the radio, Harry gets up, takes the locket off of her, and drags her into the center of the tent where they begin to slow dance. Harry's mission of cheering his friend up is accomplished when the dance becomes goofier and goofier and the burden of their mission — their lives — is alievated for a brief moment.

You can feel the weight of their daily routine — tirelessly trekking across the country for months, desperately searching for clues, sleeping rough and always in peril — heaving down upon them. Before this scene, we see a montage of Harry, Ron, and Hermione hiking far and wide in their exhausting and perilous mission, so we know the "Lord of the Rings"-like importance of their journey.

As an audience, you can physically see those worries and woes ebb away as Harry and Hermione dance together in their first carefree moment in months.

Daniel Radcliffe said in behind-the-scenes footage: "You forget that these guys are kids. This is a lot to ask of two 17-year-olds."

In the same video, director David Yates said: "Harry and Hermione's relationship is about true friendship. We wanted to do a scene without words that kind of caught that relationship. There's just something really tender and moving about seeing them trying to alievate the pain by dancing."

The acting is excellent, and it isn't a 'happily-ever-after moment'

The scene features some of Daniel Radcliffe and Emma Watson's best acting. Radcliffe's goofy dancing in this scene is actually his own and the friendship he and Watson have off-screen radiates through the camera and onto the screen, emboldening Harry and Hermione's relationship.

Emma Watson said that they originally choreographed a dance routine for the scene, but when it came to shooting, it felt more natural to allow the dance to play out unchoreographed. It gives the scene the sort of off-the-cuff authenticity usually found in indie dramas rather than mega-budget, blockbuster studio pictures.

What really makes this scene work, however, is not the fact that it's a joyful moment in an otherwise dark film, but that it also ends on a dour note.

After Harry and Hermione dance and laugh together, the two separate and it looks for a moment as if they might kiss before Hermione walks away and the reality of their bleak lives return. Again, this just makes the story and this scene feel all the more real.

It's not just a blindly happy sequence, the whole thing is saturated in deep, dark melancholy.

The song choice was perfect

Nick Cave's "O Children" was the perfect, gospel-tinged song to go with this scene. The song sounds like it could be a Church hymn, and has a slightly haunting feel to it.

The meaning of the choir-like song is slightly ambiguous, but the lyrics describe a sense of regret when people realize that what they once dreamed about with hopefulness is actually a nightmare. This chimes perfectly with what Harry and Hermione are going through.

There's even a theory that the song is about the Nazi movement during WWII with lines like "forgive us now for what we've done" applying to German soldiers. Again, this ties in with "Potter," too, as Voldemort's fascist regime, where certain people are deemed "unpure" or not really even people, has been compared to that of Adolf Hitler and the Nazis.

It not only shows how Harry and Hermione's friendship matured, but how the movies themselves matured

This is also the scene that cements Harry and Hermione's status as friends. JK Rowling herself may have said that Hermione should have got together with Harry rather than Ron but this scene in the movie shows how much Hermione loves Ron.

In behind the scenes footage, Yates commented: "In the middle of that dance, they get very close and it starts to get complicated in a way. It's friendship but it almost becomes something else. You can almost feel when they are alone together that it could slip into something that was more just friendship and that tension is really interesting."

However, when Hermione pulls away at the end, it solidifies her love for Ron, and it's refreshing to see a platonic friendship between a mainstream movie's leading male and female characters rather than a romantic one.

It also shows how the movie matured with its audiences, too. The films naturally got darker as they progressed. "The Sorcerer's Stone" and "The Chamber of Secret" are fun films that are more akin to the children's adventure movies that director Christopher Columbus is known for. They aren't without their snippets of scariness, but it's only "The Prisoner of Azkaban" and "The Goblet of Fire" where "Potter" begins to head towards a dark trajectory.

By "Deathly Hallows Part 1," the movies have evolved to explore how the main characters deal with their situation in a much more thoughtful manner than previous Potter movies did.

As such, we are treated to this dance — a moment of what Hayao Makazaki describes as "ma," which means emptiness in Japanese. Makazaki describes these moments as the silence between claps — little segments he uses in a lot of his animated films where characters do something small or mundane, or nothing at all. It gives the characters, and the audience, time to breath, and builds tension for the viewers for the larger action to come.

Just as the Potter movies matured over time, so did its audience

"Potter" is and always will be loved by many different generations, but there's a specific generation who grew up with Harry around the same age, with each movie reflecting our growing maturity in real life.

I may not have quite appreciated this scene when I first saw it in the movie theater in 2010, but now that I've grown older and matured, it has given me a deeper appreciation of Harry's story and enables me to enjoy the movies on a different level than I previously have.

As I grow older and, hopefully, wiser, so, too, do the "Potter" movies, proving that no matter how old you or the movies are, or whatever else might be happening in the wider "Potter" community, Hogwarts will always be there to welcome you home.

NOW WATCH: What it takes to be a food stylist for movies and TV shows 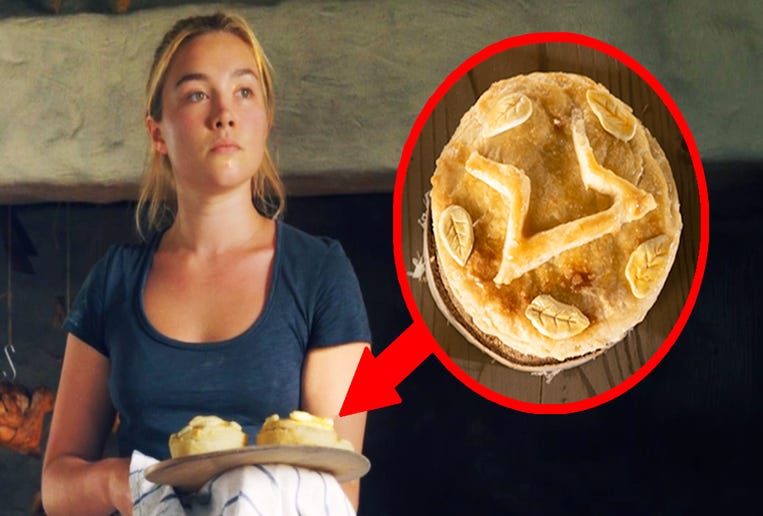