How flying scenes are shot for movies & TV 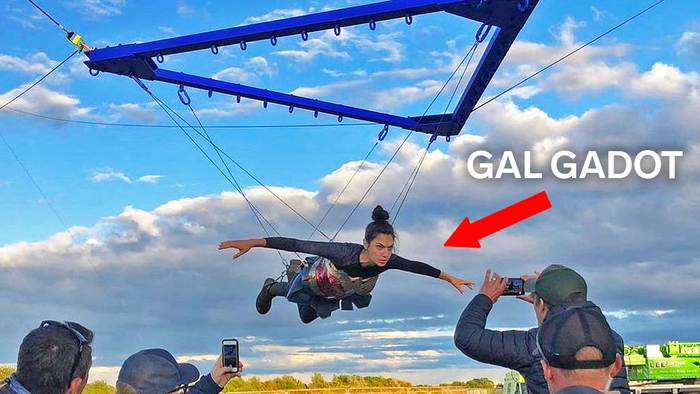 Following is a transcript of the video:

Narrator: To get this ultrasmooth flying shot from 2021's "WandaVision," you'll see that the show's stunt team relied on a complex wire setup.

Wires in superhero movies and shows aren't new, but they've gotten a lot more sophisticated since the genre's reset in 2000's "X-Men."

But you can really see just how realistic Hollywood flying scenes have become by going all the way back to the 1950s.

Spectator: Up in the sky! It's a bird!

Spectator: It's a plane!

Narrator: Back then, many of Superman's earliest flying stunts were low-tech. To take off from the ground, actor George Reeves would jump off a springboard that was either just off camera or hidden by objects in the frame.

And for shots when Superman would land through a window, he would simply climb up a ladder and jump down, with a foam mattress to cushion his falls.

But early Hollywood stunt work was not known for its safety standards.

Active flying scenes were filmed using wires, and during one production, the wires holding up George snapped.

This led to the use of pans, a low-tech but game-changing solution. George would lay stomach-down on the pan while the crew moved him around using a large pole that ran under his legs. With his arms stretched out, it could look like the actor was flying.

And because the pan was molded for the actor's body, the crew could hide it under his costume.

To really sell the myth of flying, an actor needs to actively use their core and shoulders.

CC Ice: Basically, whatever your shoulders, whatever this part of your body is doing is telling the story.

Christopher was also laying flat, but the actor's experience as a glider helped him hold his body in a more natural and aerodynamic fashion.

The filmmakers also wanted to emphasize more movement on-screen, so for wider full-body shots, the crew experimented with launching a mannequin out of a cannon and even flying a remote-controlled Superman doll.

But to get this kind of shot, it took VFX artist Zoran Perisic and his pioneering Zoptic optical process. This required a front-projected backdrop, where a two-way mirror is placed in front of the camera lens. The desired background is projected and bounces off the mirror onto a beaded screen. All of that was put onto a moving rig so the camera and projector could move in sync.

Zoran then added synced zoom lenses to both the projector and camera lens to make it look like Superman was flying towards the camera, even if the actors were motionless.

Zooming in couldn't solve one problem, though: how to make Superman's iconic cape billow in the wind.

A wind machine on its own wasn't powerful enough. So the special effects team made a remote-controlled rig with rods attached to it to place on the actor's back, hidden under the cape.

The combination of the rods moving up and down and the wind machine made the cape flap as Superman soars over Metropolis.

These contraptions became outdated once visual effects could place capes and wings in post. As you can see in these behind-the-scenes shots of 2013's "Man of Steel," Henry Cavill isn't wearing a cape. But wire rigging remains the primary method of flying, thanks to its versatility.

The same method that created Superman and Wonder Woman's graceful flight can also be used for a less-than-graceful crash landing, as seen here from "Avengers: Infinity War."

Setups can get very complicated when shots involve multiple characters in the air at once, like when Wanda battles Agatha in "WandaVision."

To allow the characters to circle and interact with each other, the team attached their wires to a truss made out of an aluminum-like material.

This supportive structure could be bolted together quickly and into nearly any configuration, which was useful for creating all types of flying configurations.

Here, stunt rigger Zac Henry locked the two stunt performers' wires in place. The truss was moved around in such a way that it looked like the two characters were circling each other.

CC: We could fly at each other and throw blasts and get those wide shots.

Narrator: Where the wires are attached is just as important as the wires and rigs themselves. Take this shot of Wanda lifting herself off the ground.

According to CC, who doubled for Elizabeth Olsen, this shot was made a reality because of precisely where they hooked the wires into her harness.

These are known as pick points, small but strong loops in the harness where the wires are attached. Those points can change depending on the performer and the type of action.

In this case, CC was attached at her hips directly to the spreader bar.

CC: I can move in between those lines and find my moment of balance.

It would allow me to stay in that horizontal flight without swinging back and giving away the illusion that it was a wire.

Narrator: For Wanda to glide off the ground at an angle, CC had two lines attached to her, one to her back and the other to her front, pulling her up and forward simultaneously.

Nearly impossible coordination would be needed to make sure these two actions happened at the exact same time, so the stunt team attached the wires to computerized winches, programming in the speeds and direction.

The more precise timing created consistent movement for the camera and for the actors.

CC: You want it to be the same for the actor every time, so that they can learn that rhythm and then they can start performing it.

Narrator: Wire rigging takes a lot of planning and coordination.

So sometimes teams might turn to a simplified setup like a tuning fork, which provides flexibility in choreography.

According to VFX supervisor Gary Brozenich, the flying sequences in "Maleficent: Mistress of Evil" benefited from tuning forks, which could stop, start, and change direction on the spot.

The performer is clamped in at their hips by two prongs while stunt performers steer them around. The fork is also useful for floating shots, but actors will still have to focus on their legs.

CC: If your chest is doing something and your legs are just kind of dangling there, it doesn't really look like you're flying at all.

Narrator: When it comes to executing a perfect landing, the stunt team will switch up their methods to allow both characters' feet to land on the ground, like in this shot, when the stunt team used what's called a parallelogram.

A performer stands on a platform, strapped in with just a belt. Counterweight balancing moves it up and down while the legs stay completely still.

CC: They can actually look like they're floating while they're standing on a little piece of a platform.

Narrator: Parallelograms are more comfortable than wires and tuning forks, but the actor's form here is crucial, not just for selling the illusion but also for their own safety.

CC: You never want to have straight legs when you hit the ground. You have to have your knees slightly bent to receive the ground, or else you can really damage your knees and your ankles.

Narrator: For these rigs to work safely and effectively, both the performer and the crew guiding them need to work in unison, which of course is prone to human error. That's where the Robomoco arm might come in.

Take this scene from "Black Widow," where Natasha and Yelena free-fall before safely parachuting to the ground.

Narrator: Certain free-falling and tumbling shots involved repeating the same motion in a straight path. For these stunts, an actor was attached to the Robomoco arm using just two pick points. The path was then programmed in advance, helpful for repeating moves over and over for different performers.

CC: They don't have much to do, so they can just be in that Robomoco arm and letting it manipulate them as they fall through the sky.

Narrator: The robotic arm can also work directly in sync with a motion-control camera, creating smoother and more continuous flying shots. This tool also proved itself useful for tumbling through the air in one continuous motion, as shown here in "Sherlock Holmes: A Game of Shadows."

Sometimes, you don't even need a real person flying at all. Today's VFX is capable of creating digital doubles from scratch.

From the Spider-Man movies to "Man of Steel," digital doubles can perform gravity-defying moves.

But flying scenes are most convincing when they're all these techniques at once.

Even the most CG-heavy flying would be nothing without the pans and wires that made early Superman fly. In fact, you can see Michael Shannon lying on one of those pans in "Man of Steel."

CC: It's really a team effort when it comes to flying in superhero magic land. All departments are involved in making that look amazing.

To have the reference of the real thing makes it that much better, and it is real. Then it does read to the audience that that is plausible, that is actually something that could happen, that could be done, because we did do it.