I used to avoid natural deodorant, but Mario Badescu's changed my mind — it smells great and lasts a full day 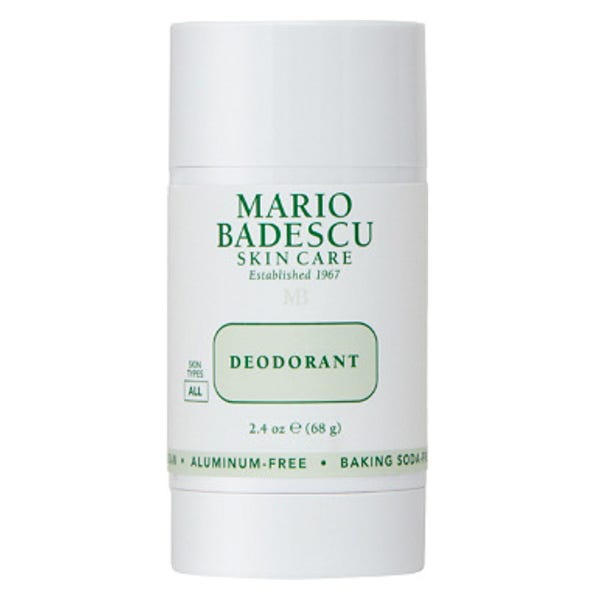 I've been a fan of Mario Badescu products since the beginning of my career as a beauty editor. Its magical Pepto Bismol-pink Drying Lotion is my hero anti-pimple product, and I double cleanse with the Cleansing Oil and Gentle Foam Cleanser every single night. In my opinion, unlike most brands, Mario Badescu is one of the few actually worth the hype it receives on social media, which is why I'm more than willing to try anything and everything the brand releases. Even natural deodorant, which, up until now, I've admittedly shied away from.

Mario Badescu introduced its deodorant ($14) back in December 2020, joining brands like Native, Schmidt's, Tom's, and Kopari in the category. The formula is aluminum-free, baking soda-free, is lightly scented, and though it contains a lengthier ingredient list than I'd normally prefer, does not irritate my skin.

According to Dr. Annie Gonzalez, a board-certified Miami dermatologist of Riverchase Dermatology, the biggest difference between antiperspirants and natural deodorants is their ingredients list: Antiperspirants might mask odor and mop up excess sweat, but they do so with a swarm of chemicals that could be potentially harmful in the long run.

"Manufacturers do not use synthetically derived chemical ingredients in natural deodorants. For example, instead of using aluminum zirconium and aluminum chlorohydrate, natural deodorants use cornstarch, arrowroot powder, coconut oil, and other natural components to discourage bacteria from lingering on the body and to neutralize odor," Gonzalez tells Insider.

Mario Badescu is no exception. The Mario Badescu Deodorant contains arrowroot, which keeps odor at a minimum and absorbs moisture, as well as coconut oil, which helps "kill bacteria growth which reduces body odor," Gonzales notes. The formula also contains shea butter, she adds, which decreases bacteria build up, nourishes the skin, and holds the deodorant mixture together. The inclusion of sage leaf extract can also prevent odor before it appears.

When you make the switch from antiperspirant to natural deodorant, your body undergoes what's called a detoxification phase or "adjustment period," in which you may experience "a rash, itchy pitch, and/or a brief period of body odor," Gonzales tells Insider. I've used a natural deodorant before, but this adjustment period wasn't nearly as lengthy or anywhere near as uncomfortable as it was the first time around with a different brand. I still experienced some excessive underarm sweat, but I only noticed it on days that were particularly warm. Unless I was being particularly active, the Mario Badescu deodorant lasted around eight hours and I didn't feel the need to reapply.

I'm almost a month into using the Mario Badescu Deodorant and I enjoy using the formula. I don't find the texture of the solid stick to be as creamy as a Secret or Dove antiperspirant, but after a few uses it became less stiff and easier to apply. In addition to sage, the formula contains cucumber and ginger root oils infused with a conditioning botanical blend that does make the skin feel soft and smell fresh, as promised.

As previously stated, because the Mario Badescu Deodorant is a natural formula, not an antiperspirant, it does not block pores and will not stop you from sweating. Therefore, if you experience a lot of excess underarm sweat or dampness, this might not be the product for you. The deodorant also only comes in one scent, so if you like a variety of aromas to choose from, a brand like Native that comes out with different (even seasonal) scents regularly, might be a great alternative for you. And, like most deodorants, the formula will show up on your clothes if you aren't careful when putting them on.

The Mario Badescu Deodorant is a great product to help you transition from antiperspirants to all-natural formulas. While it doesn't come in a variety of scents, it smells light and fresh, and because it's made with essential oils and a blend of botanicals, the product works to not only reduce odor, but nourish your skin.

$14.00 from Ulta
Julia Guerra
Julia Guerra is a contributing beauty/style and fitness writer for Insider Reviews. With over six years of writing across both verticals, she is forever testing all things makeup and skincare, fashion, athleisure, products that benefit women's health, as well as the best home gym equipment.  A full-time freelance writer and editor based in New Jersey, Julia previously served as a health and wellness reporter for Elite Daily and kick-started her career in the e-comm space as the beauty editor for BestProducts.com from 2015-2017. Julia's bylines have since spanned across publications like InStyle, Insider, SheKnows, Eat This, Not That!, MindBodyGreen, and more. When she's not writing (for work or creatively), you can find Julia curled up on her couch reading, practicing yoga, exercising in some capacity, adventuring with her husband, or spending quality time with family. Connect with her via Twitter @j_guerra27. Learn more about how our team of experts tests and reviews products at Insider here.