I threw out my old knife set for one really good chef's knife, and I have no regrets 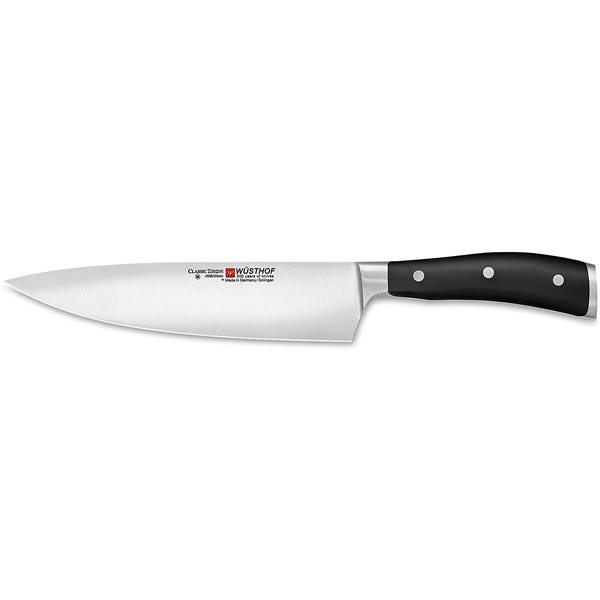 A few years ago, my friend crashed at my apartment for a couple of days. In return, she made me dinner, aided by the knife set I bought a few months before. Because she's someone who cooks really well and is the type of person to go get her knives sharpened, she had some feedback for me: mainly, my knife set sucked.

It took her hours to hack through thin carrots with my knives and she politely told me it was time to toss out the knife set and invest in a few good knives instead. She spent time giving me pointers on the handles to look for and the main differences between different knives.

I listened, but like most things in my life, I had to really endure maximum inconvenience and discomfort before I actually did something, so when I kept cutting myself on dull knives three years later, I finally decided to heed her advice.

Unfortunately, I retained almost nothing my friend said about knives, so instead of asking her to repeat everything, I just went and bought the "best overall chef's knife" in our own roundup, the Wüsthof Classic Ikon. According to my colleague Owen Burke, this "is the chef's knife for the average household in which blades aren't generally taken care of" (aka me!), so that was all I needed to be convinced.

With the caveat that I'm a very clear non-expert in knives, this knife feels fairly lightweight, has a long handle that works for larger-handed people like my boyfriend, and doesn't require a ton of pressure to actually cut through vegetables. Since buying it, I've used it for everything from chopping through zucchinis (goes through like butter!) to piercing through a kabocha squash (a Japanese pumpkin that would probably bend my old knives in half).

I saved a few small knives from my set for easy things like halving an avocado or button mushrooms, but other than that, I use this knife for all my cooking. As a bonus, it's given my small Brooklyn counter a little extra space sans a knife block, which is arguably the best part. I've only kept a few smaller knives and a higher-quality bread knife and it's more than enough.

Anyway, if you already have a knife set you kind of hate but stubbornly don't want to get rid of: learn from me! I may never get the hours I spent gently sawing through beets and sweet potatoes back, but at least I can move forward a wiser (and more enthusiastically culinary) person!

$200.00 from Williams Sonoma
$200.00 from Crate and Barrel
$200.00 from Amazon
Julia Pugachevsky
Julia is the education and personal development editor on the Insider Reviews team. Since October 2020, she's written about a popular Harvard persuasive writing course, a free UPenn course that explains the science behind COVID-19 vaccines, and a bestselling self-help book seen all over Twitter. She's also organized and edited a series on how to get unstuck during the pandemic as well as what to do when you get rejected from grad, medical, or law school. Through her work as a sex and relationships editor at Cosmopolitan and BuzzFeed, as well as a freelance lifestyle reporter, Julia learned that she loves interviewing experts and putting together stories that inspire people to make small yet effective changes in their lives. Julia is passionate about accessible, affordable education and is living proof that e-learning has the potential to make career transitions more attainable: During quarantine, she completed a five-month Coursera MasterTrack certificate program in Instructional Design from the University of Illinois while starting her role at Insider. You can say hi to Julia at jpugachevsky@insider.com or shoot her a DM on Twitter or Instagram (she is @jaypugz on both). Learn more about how our team of experts tests and reviews products at Insider here. Learn more about how we review educational and personal development products.